The Bicycle Music Festival in San Francisco California is one heck of a pedal-powered mobile part. The summer of 2012 was the 6th annual BMF, and things got rolling in the afternoon in Golden Gate Park with bike-blended ice cream and smoothies, food by HotBike!, and seven acts:


Rock the Bike rigged up the sound system and transported it via bicycles to the park. Audience members hopped on one of their fourteen stationary bikes which are wired up to power a full-range sound system including subs, a mini-line array, and loudspeakers. 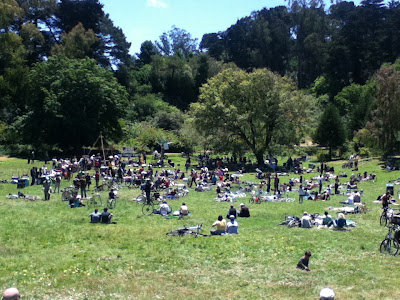 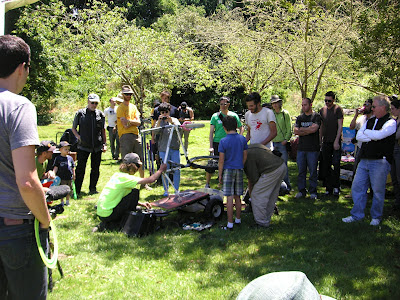 After an awesome afternoon of music in the meadow, all of the stage/sound gear was as loaded back up onto bikes and the entire festival took to the streets.  But the music didn't stop there! A mobile stage, pirate radio transmitter, and Fossil Fool the bike rapper kept the beats bumping all the way to Showplace Triangle in Portrero, where the night portion of the party took place.