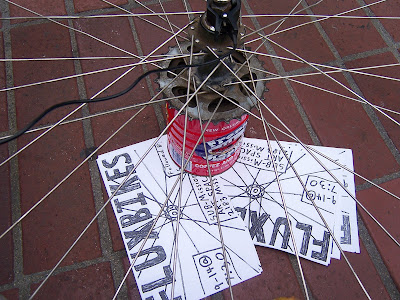 After hanging with the Schizcago crew in the Mission, we played another impromptu show at the Ferry Plaza Farmer's Market in San Francisco. While we were there hunting for a good location to set up, we met Revolva, an Oakland hoop performer with a heart as big as a quadruple-sized, expanding hula, which we saw her dancing with. We were lucky to be accompanied at the Ferry Building by Sir Ritwik Banerji, accomplished astromusicologist at UC Berkeley along with Maxine, his interactive music system that is based in Max/MSP. 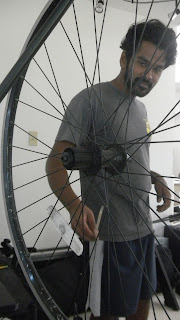 FLUX Tour 2011 was happy to be in San Francisco for the September Midnight Mystery Ride with the new chapter that formed there. We rode to Baker Beach (birthplace of Burning Man) for a surreal view of the Golden Gate Bridge, but were forced out of there by police shortly after arrival. Instead, a hardy crew pedaled on to Ocean Beach for a late-nite doughnut and whiskey séance.

After bidding farewell to San Francisco, we crossed the Bay and the next day gained entry to the Center for Now Music and Technologies, where we were able to record with Ritwik. These and other live recordings are now being compiled along with some tour footage for a video. 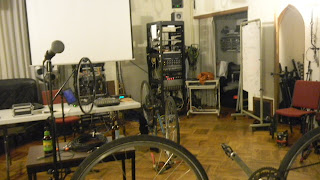 Before leaving the Bay area for Tahoe, we made sure to check out Rock the Bike's workshop in Berkeley, where we were graciously showed some of the awesome bike accessories being fabricated and told about other ongoing projects. RTB has a refreshing perspective on promoting bicycles as vehicles for social change. Be sure to check out their website, especially The Pleasant Revolution and Bicycle Music Festival!  Below is a picture of their Down Low Glow ground effects lights for bikes. 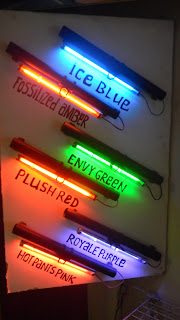 Posted by Major DeCoverly at 11:41 PM