FLUX BIKES: a bicycle/audio tour of Chicago featuring solo performances by Rob Frye on bicycle wheel and saxophone. Riders were invited to make sounds with their own bicycles using catalpa seed pods and playing cards. This group ride was based on the Happenings associated with the Fluxus artists in the 1960's. There were surprises along the way (3D glasses and mural viewing) and conversation about the places along the route -- such as the 1968 Democratic National Convention protest sites in Lincoln Park, scrap metal yards, and the Bloomingdale Trail. FLUX BIKES started at the Alfred Caldwell Lily Pond in Lincoln Park and ended at the Boat House Pavilion in Humboldt Park. 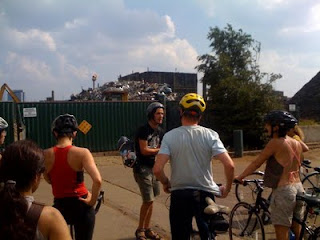 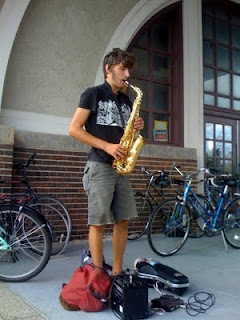 Flux Bikes in the Reader

Thanks to Jeff Kowalkowski, Experimental Sound Station, Marta Sofia Honer and all the ryders!
Posted by easyryder at 2:00 PM